Apple’s positions on climate change require greater scrutiny (as to its privacy and security claims and other talking points). Let me start with a quote from an article that appeared on the website of the Tech Transparency Project on May 31, 2022:

Apple CEO Tim Cook talks about a ‘greener’ future. But his company is a member of business associations fighting efforts to reduce greenhouse gas emissions.

The Tech Transparency Project names such groups as “the Texas Association of Business, which has questioned whether humans are causing climate change and has a long history of fighting against regulations designed to curb carbon emissions.” And it says that seven of the industry associations Apple disclosed in 2020 to be involved with oppose right-to-repair legislation. The first one on the (alphabetical) list: ACT | The App Association, an astroturfing group that Bloomberg exposed in September as being overwhelmingly funded by Apple and falsely claiming to represent the interests of small app developers.

Just about a week before that Bloomberg article, which (as I also said in my previous post) should dissuade any policy maker from ever taking ACT seriously, ACT seized one opportunity–which should be the last–to attempt to fool the European Commission.

Thanks to the AskTheEU website it has become known that on September 8, 2022, at 2 PM Brussels time, two unnamed representatives of ACT | The App(le) Association met with Mrs. Alina-Stefania Ujupan and Mr. Alejandro Cainzos, members of the cabinet of the European Commission’s Executive Vice President (in charge of competition enforcement and digital industry policy) Margrethe Vestager as the following minutes of the meeting show (click on the image to enlarge or read the text below the image): 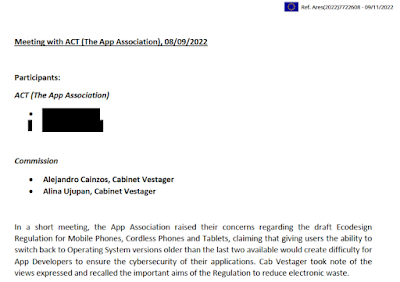 This is the summary:

“In a short meeting, the App Association raised their concerns regarding the draft Ecodesign Regulation for Mobile Phones, Cordless Phones and Tablets, claiming that giving users the ability to switch back to Operating System versions older than the last two available would create difficulty for App Developers to ensure the cybersecurity of their applications. Cab Vestager took note of the views expressed and recalled the important aims of the Regulation to reduce electronic waste.” (emphasis added)

ACT–which receives the vast majority of its funding from Apple and doesn’t even have regular membership dues for small app developers–emailed Mr. Cainzos on July 11, 2022. The subject line was “Meeting request with the App Association on the new Ecodesign Regulation proposal.” ACT | The Apple Association said it “wanted to flag some concerns [they] have on the proposals in the draft regulation” and asked:

“Would you be available for a short meeting in the next couple of weeks to discuss further the potential impact of this regulation on small app developers?” (emphasis added)

The world’s richest corporation, lobbying against environmentally sound policies in the name of “small app developers” while engaging in greenwashing all the time…

There are simply two reasons why Apple does not want users to be able to switch back to older iOS versions:

Is this of concern to small app developers? Seriously, the average small app developer wouldn’t even be aware of the European Commission preparing an Ecodesign Regulation for Mobile Phones, Cordless Phones and Tablets. ACT has a budget of approximately 10 million dollars and claims to represent 5,000 small app developers, which would mean that the average member would have to pay annual membership dues of 2,000 dollars. In reality, Apple foots the bill, and those 5,000 “members” are just a claim. On ACT’s website, one can only find a few dozen companies, and they’re mostly service providers (as opposed to app makers who publish their own products). I attended an ACT event in Berlin in September 2019, and I was definitely the only app developer in the room…

Do small app developers have a “cybersecurity” problem if users can switch back to older operating system versions, as Apple’s astroturfers told the Commission?

Being an actual app developer, what I can say is that, generally speaking, fragmentation is not in our interest, and that’s a concern that should be taken seriously. I say so even though I also advocate competition enforcement against Google in the Android context, where Google makes “anti-fragmentation” arguments all the time.

However, what makes no technical sense here is that our own apps would have “cybersecurity” problems if Apple simply allows more backwards compatibility. If our code is secure on the latest version of iOS, why would it be insecure on an older version? Only if Apple doesn’t keep older versions sufficiently secure.

Small app developers like my company actually have a problem with Apple’s planned obsolescence of products. When we write software for desktop operating systems today, we can rely on that software still being functional and available to end users in, say, ten years from now. On mobile platforms, especially iOS, we are forced to upgrade software to newer API versions all the time. Apple (and Google) could add features and still ensure backward compatibility. They could expand their APIs without deprecating old APIs after a short while.

One example is that Apple decided to make version 2 (and, as a result, all subsequent versions) of its Swift programming language incompatible with version 1. That’s because Apple recognized some design mistakes: there were features in Swift 1 that seemed innovative at first, but adversely affected code legibility. Instead of remaining backward compatible, Apple stopped supporting newer iOS API versions in Swift 1. In 2018, Apple then gave developers an ultimatum: upgrade to a newer API version (which implied upgrading from Swift 1 to a newer version of the language) by a certain date, or you can no longer update your app–which was definitely not good for cybersecurity because developers must update an app to fix a security issue in the code.

Simply put, Apple doesn’t care about the burden on small app developers, but its lobbyists masquerading as representatives of small developers hoped the Commission would be swayed on that basis. “Look at us poor little guys. Don’t you have sympathy with us?” Astroturfing at its worst.

The best part of the minutes of that September 8 meeting between two members of EVP Vestager’s cabinet and ACT is that they stressed the policy goal of waste reduction, which suggests to me that ACT’s fake small developer arguments were unpersuasive.

The worst part, however, is that two (!) members of the cabinet of one of the key players of the European Commission wasted some of their precious time with Apple-funded astroturfers. Maybe they’d have canceled the meeting if the Bloomberg article on who really funds ACT had been published just a couple of weeks earlier (and if they had seen it in that case).

Should ACT get any more meetings with any member of cabinet of any EU commissioner now that it has been exposed as an Apploturfing operation, someone should start a petition for the EC to get a free Bloomberg subscription… 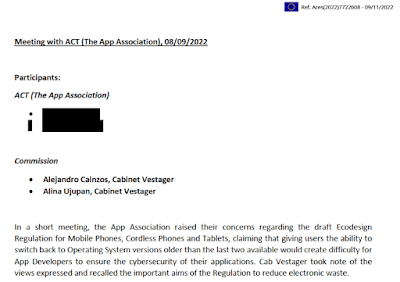