Every once in a while, Ericsson and Samsung have to renew their patent cross-license agreement, but those negotiations have become more complicated over time. The following timeline, included in a Samsung filing with the Federal Circuit, shows how the partes have periodically had to go to court (always on a cross-jurisdictional basis) before they struck the next deal (click on the image to enlarge): 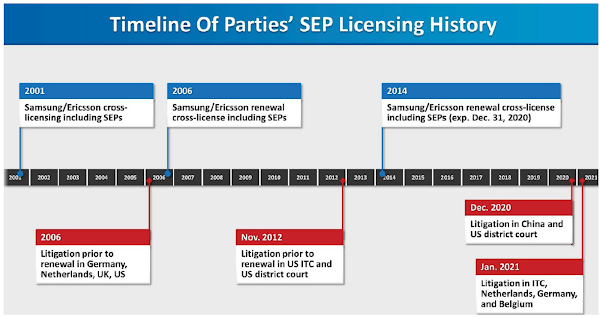 The chart also shows a trend toward ever more protracted litigation. A trend reversal is possible: maybe they’ll be able to settle sooner this time around, but I wouldn’t hold my breath, given that Ericsson is ever more dependent on patent licensing revenues and now more concerned than ever about competition from Samsung in its core business (mobile base stations).

Samsung’s approach to those disputes–including the one with Huawei a few years ago–is “tit for tat”: if you sue them somewhere over X patents, they’ll countersue (unless you have zero exposure for lack of products) over the same number in the same jurisdiction. Only against Apple, almost exactly ten years ago, Samsung was first to file infringement cases in some countries, responding to Apple’s initial action in the Northern District of California with a bunch of intercontinental standard-essential patent (SEP) assertions. And even then, there was nothing that Samsung wanted more than to be left alone and compete on the merits of their products–something that Ericsson failed to do in the handset market and is increasingly struggling with in the network infrastructure business.

Yesterday evening by Eastern Time, Samsung filed its opening brief in the Federal Circuit appeal of Ericsson’s anti-anti-antisuit injunction from the Eastern District of Texas (this post continues below the document):

The 76-page filing contains the timeline shown further above and raises a number of issues concerning Ericsson’s preliminary injunction. After Ericsson’s opposition filing in early April, I’ll discuss some of them in more detail. Samsung is hedging its bets, asking for reversal of the PI as a whole while also taking fallback positions that would allow parts of the PI to stand while potentially making it much less harmful.

Ericsson has empohasized strongly–and will presumably continue to emphasize–its criticism of the fairness of Chinese courts. In the court below, Samsung already presented a declaration by former Federal Circuit Chief Judge Randall R. Rader (whose predecessor, Paul Michel, filed an amicus brief in support of Ericsson’s position). What may ultimately bear more weight with the Federal Circuit than the former chief judges’ views, however, is the fact that Samsung can point to Supreme Court, Fifth Circuit (whose law is controlling here, even though the Federal Circuit has appellate jurisdiction as there are patent infringement claims in the same case), and other federal appeals courts “regularly defer[ring] to Chinese courts in forum non conveniens cases”:

What might impair Ericsson’s chances on appeal more than anything else, however, is the fact that the appellate judges can easily see Judge Rodney Gilstrap didn’t handle this matter as the neutral arbiter he should have been. There are details such as the fact he gave Samsung a deadline on New Year’s Day for its opposition brief to Ericsson’s PI motion or that he essentially copy-pasted Ericsson’s motion for a temporary restraining order (the TRO was unbelievably overreaching). What may very well undermine the credibility of the court below more than anything else, however, is the fact that Judge Gilstrap incorrectly accused Samsung of “the height of inequity (and hypocrisy).” That’s a huge #FAIL. And it’s not just an oversight–as I’ll explain in a moment, a mistake that I made as well a few days ago–but in Judge Gilstrap’s case it’s connected to his extreme bias in this context.

Samsung’s opening brief clarifies that “[a]s of this writing, all such actions [pending between Ericsson and Samsung] either assert non-SEPs, or assert SEPs but without seeking injunctive relief.” But Judge Gilstrap falsely based his accusation of hypocrisy on the misperception that Samsung was seeking a U.S. import ban–called a “limited exclusion order”–against Ericsson in the International Trade Commission, a U.S. trade agency with quasi-judicial powers, over a bunch of SEPs. It turns out the asserted patents are actually non-SEPs.

I readily admit that I made the same kind of mistake just two days ago as I commented on the four ITC complaints brought by these parties against each other (two by each party). Without digging deep enough to learn that those are all non-SEPs, the references to 4G and 5G appeared to indicate there were SEPs involved. Not so.

When Judge Gilstrap got this wrong on January 11 (in his PI order), Samsung immediately filed a notice to alert him to the mistake he had made. Just like him, I, too, should have actually read the complaint in detail before jumping to a conclusion. From now on I’m not going to categorize a patent assertion as a SEP assertion unless a pleading says so or a patent-in-suit can be found in a SEP database. But if I miscategorize some patents-in-suit in a blog post, especially at a point where pretty much nothing has happened in the related cases yet and the possibility of a presidential veto is still there (simply because mobile network infrastructure is critical), it doesn’t matter nearly as much as when a judge goes on his own search for further facts (instead of just relying on the record of the case before him), gets it wrong, and then scolds a defendant.

Neither Samsung nor Ericsson had mentioned that ITC complaint in their filings by the time Judge Gilstrap entered his PI order. He might look up the ITC docket routinely from time to time, or he saw Ericsson and Samsung mentioned in the news, or he googled for further information on the dispute.

If you–as a judge (here, Judge Gilstrap) or party (here, Ericsson)–hope for an order by a district court to be affirmed, you want it to come across as a well-reasoned and correct decision by a neutral (and not agenda-driven) judge. Once an appeals court gets the impression that something went wrong below, reversal becomes much more likely. In this case, even a partial reversal would already make a huge positive difference to Samsung.

It’s funny, by the way, that even Samsung’s lawyers made a small mistake: that opening brief repeatedly and consistently refers to “the United Kingdom Patent Court.” That’s not the official name of any court. What they mean is the England & Wales High Court (EWHC). Those megadisputes involve so many issues, so many patents, and so many jurisdictions that sooner or later all of us get confused about something.

View the original article here: Ericsson-Samsung escalation led Judge Gilstrap and me to the same miscategorization of certain patents-in-suit: no SEP injunctions being sought YET