On both sides of the Atlantic one can watch interesting examples of “reverse protectionism”:

Antitrust enforcement should simply be a question of legal merits. But the industrial-policy argument that some forces within the European Commission make in Nokia’s (and, by extension, Ericsson’s) favor just doesn’t withstand even superficial scrutiny.

Three charts that I’ve quickly produced with OpenOffice Calc, relying on data points published on the Internet, show that the European Union would ultimately help Asian and American patent holders extract license fees from European product makers more so than it would strengthen Nokia and similarly-situated Ericsson:

The underlying patent licensing issue affects more than the automotive sector. There’s an emerging Internet of Things industry, and countless European IoT startups are simply not equipped to deal with end-product-level SEP licensing but could make highly innovative products if the wireless chips they incorporate into their products were exhaustively licensed. 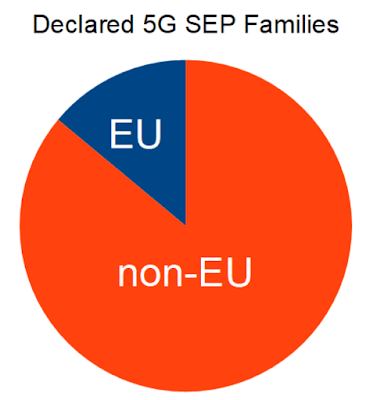