Litigation is a hardass business, as I’m sure none of this blog’s informed readers would deny. At the Munich I Regional Court (“Landgericht München I”), one of Europe’s patent powerhouses, that’s also literally true. Should the court ever adopt the German custom of naming benches after real persons (you can see the little name plates in many parks), I propose the following seating area right outside of courtroom 501 be named after a certain Mr. Mike Kay since he spent almost 12 hours waiting there on November 8, unfortunately in vain, for an opportunity to testify in a Qualcomm v. Apple patent infringement trial: 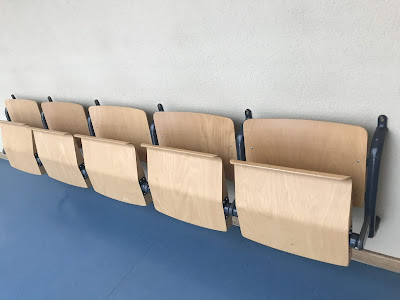 Mike Kay is a Qorvo employee and designed the envelope tracker chip used in some iPhones models that Qualcomm alleges infringe on its European patent EP2724461 (“low-voltage power-efficient envelope tracker”). The court must be exonerated for a couple of reasons. First, because Mr. Kay was so eager to speak out on the inner workings of his chip, he voluntarily stayed as close to the courtroom as possible, though at the other end of the aisle there would have been a slightly more hospitable seating area: 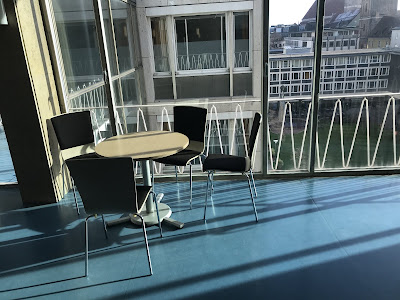 What’s more important is that the defending alliance (Apple-Intel-Qorvo) brought him along to the November 8 trial without the court having put him on the official witness list. There was no formal discovery order in place. German courts can, in their discretion, depose a witness who happens to be around voluntarily. Presiding Judge Dr. Matthias Zigann didn’t exercise his discretion to that effect, but he’s not responsible for rewarding perseverance. He could, however, still do so in a decision currently scheduled to be announced on December 20, provided that the three-judge panels he presides over will conclude that it’s necessary in order to arrive at a well-founded, factually correct judgment. One of the things that may give the judges pause is the fact that an Administrative Law Judge (ALJ) at the United States International Trade Commission (USITC, or just ITC), with the benefit of Mike Kay’s testimony and access to the schematics of the accused circuitry, concluded that Qorvo’s chipset architecture does not infringe a claim of a U.S. patent from the same Qualcomm patent family.

I spend most of my time on things unrelated to this blog and the topics it covers, and that was also the case on the trial date. However, when the story of “Mike’s ordeal” made the rounds in the IP community, I tried to find out more. A spokeswoman for the court pointed out that Mr. Kay was not on the court’s witness list for that particular trial date. Apple declined to comment; Qualcomm’s great PR agency (Burson Cohn & Wolfe was quick to respond, but didn’t elaborate beyond correcting a factual error (regarding a technical aspect of the case) in a news agency article. So I reached out to Intel, who reacted the way Apple did, and Qorvo. I very much appreciate the competence and the patience with which Qorvo’s Chief IP Counsel Michael Baker, who had attended the trial, answered my questions. I didn’t have the opportunity to talk to Mike Kay, but got all the information I needed.

Mr. Baker stressed that Qorvo actually has a good relationship with Qualcomm in some other areas, but they do disagree with Qualcomm’s infringement assertions in this case. And he convincingly explained that Qorvo has the greatest respect for both the Munich judges and the renowned, court-appointed chipset expert, Professor Stefan van Waasen. However, Qorvo believes the court and Dr. van Waasen should have all of the information–the chipset schematics as well as Mike Kay’s testimony–in front of them when the opine and rule. Mr. Baker told me Qorvo would be more than happy to present the schematics to the judges, the expert, and parties’ counsel in order to prove that various claim limitations, with particular emphasis on an “offset” (number 328 on Figure 5 of the patent specification), are not practiced by Qorvo’s envelope tracker chip. They say their product achieves the same power-saving effect (which is relevant when battery power goes down) by different means, but in this “hypercompetitive” market (as Mr. Baker describes it) they can’t possibly let Qualcomm’s or anyone else’s engineers take a look at their schematics.

According to a German news agency report that mischaracterizes the technical aspects of the case, Dr. van Waasen basically said he can’t see how else (if not by infringing the patent-in-suit) the accused iPhone models achieve the same effect. But that opinion was based on a tear-down report provided by Qualcomm, and as I’ve been told, such tear-down reports are inherently less than 100% reliable, much less complete.

Most of this blog’s readers are based in the U.S. and may wonder: why can’t they just solve this through an “AEO” (Attorneys’ Eyes Only) designation of the material in question and exclude the public from Mike Kay’s testimony?

But in a similar way Germans might ask: why the hell do they need juries in the U.S. and multiple weeks of testimony to rule on patent infringement questions that German courts quite often adjudge after a two-hour trial without any witnesses or discovery? There simply are differences between the jurisdictions.

German courts can also depose witnesses behind closed doors. However, there’s no German equivalent to a protective order.

Actually, everything was in place and on track to get the best of both worlds: the efficiency of German proceedings and the flexibility regarding a protective order provided by U.S. law. But then Qualcomm made an about-face that I really don’t understand. I’ve downloaded and studied various documents from a U.S. discovery proceeding that Qualcomm started in March, telling the U.S. court it needed to conduct discovery of Qorvo’s chipset architecture under 28 U.S.C. § 1782. In the summer, the United States District Court for the Middle District of North Carolina (where Qorvo is headquartered) approved a protective order that Qualcomm and Qorvo had negotiated (this post continues below the document):

Stipulation and Protective … by on Scribd

As far as I understand, while Qualcomm’s U.S. counsel from the Quinn Emanuel firm agreed to the protective order, Quinn Emanuel‘s German lawyers elected not to do so, and thus claimed they couldn’t present Qorvo’s chipset schematics at the November 8 trial.

This is evidentiary minimalism on QE’s part. It’s in stark contrast to what the firm’s founder, John Quinn, told Judge Lucy Koh of the United States District Court for the Northern District of California at a 2014 Apple v. Samsung trial. “What’s the point in having a trial [without all the evidence on the table]?” I agreed with Mr. Quinn then. I agree with Qorvo, between the lines, saying the same thing now.

I don’t have, and for lack of access to the evidence, won’t ever have an opinion on whether Qorvo’s chip practices all limitations of the patent claim-in-suit. But the outcome at the ITC does suggest the schematics and Mike Kay’s testimony are relevant, and there’s a pattern here where Qorvo goes to extreme lengths, as long as the confidentiality of its chip design be protected, including that they offered to set up a complete test environment in Germany for the expert, while Qualcomm and Quinn Emanuel, for whatever reason or no reason, prefer the expert to opine on the basis of a reverse-engineering effort commissioned by Qualcomm.

Also, I’ve been party to a couple of non-patent cases in Germany where courts appointed experts, and the ordinary procedure here is that an expert furnishes an opening report, enabling the parties to ask questions that give rise to one or (often) more supplemental reports, before the expert testifies in court. Here, Judge Dr. Zigann made it clear in February that the appointment of an expert only for the November trial was going to be an experiment. I can understand that he, actually a leading author on patent procedures, sought to streamline the process. With multiple rounds of questions to be put before the expert, it could have taken another 6-12 months to resolve this case. But even the 12-hour court session on November 8 (from 9 AM to 9 PM local time) apparently failed to shed light on some key technical aspects, for lack of access to the material Qualcomm’s counsel had actually obtained through a U.S. discovery proceeding.

There’s actually an indication that the German court wasn’t necessarily satisfied with the state of affairs at the end of the November 8 trial as the official minutes of the meeting (based on what I learned) explicitly mention that the court would entertain a motion to reopen proceedings. Since no leave to file such a motion is required under German procedural law, that may mean that a reopening of the record may happen contrary to a non-final holding at the trial that the defendants presented certain evidence out of time. As far as I understand things based on what Qorvo told me, the timing problem was due to Qualcomm’s about-face as they had all originally relied upon the chipset schematics (and Mike Kay’s testimony) forming the basis of the decision in Germany, just like at the ITC.

In all the patent infringement cases I watched, a reopening of proceedings (which basically means that another trial is scheduled) was needed at least once. The Mannheim Regional Court reopened a Motorola Mobility v. Microsoft case over a push notification patent that ultimately turned out invalid anyway. Should the Munich Qualcomm v. Apple case over Qorvo’s envelope tracker continue, I have no doubt the court won’t let Mike Kay wait outside for so many hours. And, in the hypothetical, I’d recommend to Mr. Kay to sit on the softer chairs down the aisle, with a nicer view. 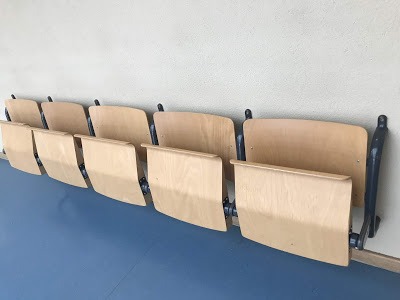