Competition regulators in various jurisdictions are reviewing Microsoft’s acquisition of Activision Blizzard King. Earlier today I already wrote about that topic: Forbes is spot-on that Sony doesn’t want Microsoft to keep Call of Duty on PlayStation: it wants to do its own exclusive deals with an independent Activision Blizzard (as does Google!)

Today, the UK Competition & Markets Authority (CMA) released the public redacted versions of filings that Microsoft (PDF, 111 pages) and the only vocal critic of the deal–Sony (PDF, 22 pages)–made in late October. I’ve quickly digested them both and would like to share a few observations here, particularly arguments that looked new to me. First, a list with anchor links that can take you directly to any of the sections of this post:

Epic Games’ Fortnite is mentioned 41 times in Microsoft’s submission. Microsoft explains that Fortnite is strategically more important to console makers than Activision’s Call of Duty (no emphasis added below):

“Call of Duty does not drive platform adoption. Xbox data shows that between 2016 and 2022, only [REDACTED]% of gamers played Call of Duty as their first game on their new Xbox console […] Fortnite is the most common first played game …””

“Fortnite, the most popular game franchise in the world with over 400 million registered users. For[t]nite is the number one title on the Xbox console (across all genres) by hours played and is available on PlayStation and Nintendo Switch.”

“Call of Duty does not drive social media conversations: […] no Call of Duty game made it to the top ten ‘Most Talked About Video Games‘ on Twitter last year. Similarly looking across other widely used social media channels, Fortnite and […] are really driving social media interaction.

The above is of particular importance because Sony is an Epic shareholder, making it impossible to imagine that Fortnite would be removed from the PlayStation anytime soon.

Microsoft has previously said–and I don’t think anyone can disagree–that cloud gaming is a rather nascent technology and of limited relevance for the foreseeable future. Now, what’s very interesting in Microsoft’s October 31 filing with the CMA is that even Fortnite hasn’t really met expectations yet as an Xbox Cloud Gaming title on iOS and Android devices. The filing is heavily redacted, but I believe one can reasonably deduce from the publicly accessible parts (such as this headline: “Xbox’s experience with Fortnite highlights the challenges“) that streaming is not the answer and Fortnite Mobile–i.e., native iOS and Android apps–must return to the App Store and the Google Play Store as soon as possible.

“Research published by the CMA [Mobile ecosystems Market Study Final Report] shows that, both worldwide and in the UK, where cloud gaming app users had a choice between a provider’s native or web app on Android, around 99% of users used the native app, with 1% using either the web app or a combination of the web and native app. Microsoft’s experience with adding Fortnite on Xbox Cloud Gaming illustrates these challenges.”

In May 2022, “Fortnite was launched as a free-to-play game on Xbox Cloud Gaming in May 2022. As the game was free-to-play and available separately from Game Pass, Microsoft was relatively optimistic as to the number of potential users of the service.” But it seems it hasn’t met expectations. The results and the way Microsoft describes them are redacted out, but the two previous references to “challenges” show that it’s not going smoothly, and the filing specifically explains that “there were significant issues with gamers being able to discover and access the game, particularly on mobile devices.” The key issues Microsoft identified are:

Just yesterday, the very CMA launched a market investigation into mobile browser and cloud gaming. I will comment on that one (and the UK’s renewed focus on its Digital Markets Unit legislation) later this week. On Twitter, Megan Gray–a lawyer with tremendous expertise in tech competition and policy issues–asked why the CMA combined these two topics. I defended the CMA’s decision because even though the “web app” argument is made by Apple and Google in various contexts, cloud gaming is an extreme case of a thin client where only minimal functionality resides on the end-user device–and still the user experience is degrade massively because of the WebKit monopoly. On that basis, she agreed. Here’s the related Twitter thread:

The CMA blocked Facebook parent Meta’s acquisition of GIF platform Giphy, and as a result, Meta surrendered last month and announced that it would sell Giphy. Microsoft’s filing explains that any vertical foreclosure theories relating to its acquisition of Activision Blizzard King are extremely distinguishable from the Facebook-Giphy situation if one looks at what really matters in merger control: market share.

First, Microsoft notes that input foreclosure has only resulted in a finding of a substantial lessening of competition in three Phase 2 cases, making it a rare exception (“accounting for less than 1% of the CMA’s merger decisions”), but input foreclosure “has never been found in a case where one merging party was the smallest player in the downstream market [Microsoft in consoles, where it is behind Sony and Nintendo] and the other merging party was one of more than a dozen suppliers [game makers] competing in the upstream market.”

“Activision is currently the fifth largest console game publisher with a share of [5-10]% globally in console game publishing.33 Following the Merger, the Merged Entity will be the third largest publisher with a share of only [10-20]% globally, reflecting the highly fragmented nature of game publishing.34 On the downstream market, Xbox is the third placed player (with a global share of [10-20]%), seeking to innovate and compete with two strong competitors, with much larger installed bases of consoles and strong content portfolios.”

These two charts from Microsoft’s filing show that the cases present different fact patterns. First, the Facebook-Giphy situation (click on the image to enlarge): 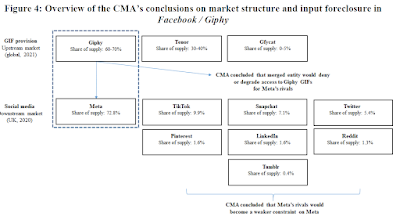 That’s what a fragmented upstream market looks like. It’s striking.

Sony says the sky would fall if Microsoft made Call of Duty an Xbox-exclusive title, but even if every CoD player migrated from the PlayStation to the Xbox, Sony would still be the market leader; Microsoft has no economic incentive to do that as a tech policy think tank explained; and it has offered a ten-year deal to Sony, which–as Forbes plausibly argues–Sony doesn’t accept because it just wants to derail the transaction. By the way, the filings released today are almost a month old, and it appears that when the filings were made in late October, the offer was a contract that would have given Sony certain assurances until 2027. But by now we nowthey could have a ten-year deal.

In this context I find the following passage from the latest filing interesting. It explains that even some Xbox-exclusive CoD content wouldn’t move the needle:

“Sony was not foreclosed when Call of Duty was exclusive to Xbox: There is no indication, based on Call of Duty’s prior history of differentiation between versions of Call of Duty on Xbox and PlayStation, that this could in any way affect rival consoles’ ability to compete effectively. Sony’s share of console sales grew in the period from 2005-2015 when Xbox had certain exclusive rights to Call of Duty content. There are many more popular games available in the market in 2022 than there were between 2005 and 2015 (including Fortnite, […]). If anything, Call of Duty’s importance as a franchise was greater in 2005-2015. When Xbox decided not to continue with the Call of Duty co-marketing agreement in 2015, it simply found other ways to market and promote its platform. Sony, as the market leading console with an extensive first-party and third-party exclusive game catalogue, is even better placed to do the same.”

A couple of other arguments about CoD’s limited ability to be used for a vertical foreclosure strategy are also worth highlighting. Steam never needed CoD–and Steam is definitely the kind of platform that hard-core gamers use. The CMA argued before that the Nintendo Switch doesn’t really count in the Microsoft-ActivisionBlizzard context because it’s more of a family games platform. But Microsoft notes that Nintendo does compete with Sony and Microsoft (as opposed to a two-horse race between Sony and Microsoft):

“[…] more mature/adult games are available on the Switch and are actively marketed, including on Switch’s YouTube channel. These games include Apex Legends, The Witcher 3, Doom Eternal, Wolfenstein II: The New Colossus, Cult of the Lamb, NieR: Automata The End of YoRHa Edition, Alan Wake Remastered, Crysis Remastered, Outlast, Little Nightmares, Five Nights at Freddy’s and Life is Strange.”

And various recent Switch-exclusive titles have received “mature” ratings by the Entertainment Software Rating Board (ESRB) “for violence, blood and gore, partial nudity and strong language,” and similar reasons. In order to illustrate this, Microsoft’s filing contains a screenshot from the latest Bayonetta 3 game.

Microsoft points to its track record after the Zenimax acquisition

It’s never been doubted by anyone that Microsoft made Minecraft available on more, not fewer, platforms after acquiring its maker (Mojang). But there have been claims that Microsoft made ZeniMax titles exclusive to the Xbox. Microsoft’s filing with the CMA, however, states that “Microsoft has not taken any existing ZeniMax titles which were shipping on PlayStation on 9 March 2021 (the date when it closed its acquisition of ZeniMax) off PlayStation or other platforms.” The first Xbox and PC exclusives will be two entirely new games that are scheduled to be released next year (about two years after the acquisition closed). The following table shows Microsoft’s track record with ZeniMax titles on PlayStation (click on the image to enlarge): 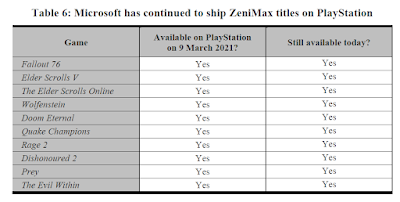 The reason why I have little to say about Sony’s filing is because it reiterates the same talking points everyone has heard for a while, and they just say that the CMA was right with the issues it identified in Phase 1. But now the hurdle is higher, and as Microsoft’s filing explains, no “cogent body of evidence” exists in the Microsoft-ActivisionBlizzard case to warrant a blocking decision.

So I haven’t found any substance in Sony’s filing (though I will re-read it to be sure). What I did notice, however, is an untruthful representation: Sony says that “Microsoft is presently under investigation for leveraging practices involving Azure and Windows.” However, the fact that someone brought a complaint doesn’t mean that there are formal investigations. The European Commission certainly hasn’t announced any formal investigations, and Sony’s document cannot point to, or cite, any information to the contrary. 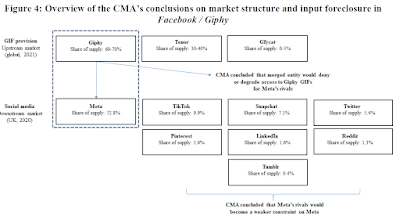