Alice in Patentland is a series of web articles where we analyze the most impactful Alice motions. This is the Prologue to this series and will explain who is Alice and why is she so important in Patentland.

Alice Corporation (hereinafter referred to as “Alice”) had four patents (US 5,970,479, US 6,912,510, US 7,149,720, and US 7,725,375) on electronic methods and programs for financial-trading systems. Alice alleged that CLS Bank International and CLS Services Ltd. (collectively referred to as “CLS Bank”) started using similar technology in 2002. When the issue was not resolved mutually, CLS Bank filed a lawsuit against Alice in 2007 to prove that the claims were invalid. Alice counterclaimed, alleging infringement.

CLS Bank sued Alice in the United States District Court for the District of Columbia, seeking a declaratory judgment that Alice’s patents were invalid and unenforceable in 2007. Alice countersued CLS Bank claiming infringement of the patents.

The court declared all of Alice’s patents invalid because the claims were based on abstract ideas, which are not patentable under 35 U.S.C. § 101.

In 2012, Alice appealed the decision of the District court in the United States Court of Appeals for the Federal Circuit. In July 2012, a panel of the appeals court decided to reverse the lower court’s decision.

However, the members of the Federal Circuit vacated that decision and set the case for reargument en banc.

The court stated a test that focused on first identifying the abstract idea or fundamental concept applied by the claim and then determining whether the claim would preempt the abstract idea. The analysis involved making four steps:

The software industry and patent professionals showed keen interest in the issue. Many companies and groups filed amicus curiae briefs urging the Supreme Court to decide the issue of software patent eligibility.

On the 19th of June 2014, the Court unanimously invalidated the patent, in an opinion by Justice Clarence Thomas.

When the Mayo case was decided, there was some uncertainty whether its rationale could be applied only to natural principles (laws of nature) or could also be applied to determination of patent eligibility of all abstract ideas and general principles, including software patents. The Alice decision confirmed that the test was general.

Mayo First Step: Determining whether the patent claim under examination contains an abstract idea, such as an algorithm, method of computation, or other general principle. If not, the claim is potentially patentable, subject to the other requirements of the patent code. If the answer is affirmative, the court must proceed to the next step.

Mayo Second Step: Determining whether the patent adds “something extra” to the idea, that embodies an “inventive concept.” If there is no addition of an inventive element to the underlying abstract idea, the court should find the patent invalid under § 101. This means that the implementation of the idea must not be generic, conventional, or obvious, if it is to qualify for a patent. Ordinary and customary use of a general-purpose digital computer is insufficient, the Court said—”merely requiring generic computer implementation fails to transform an abstract idea into a patent-eligible invention.”

Despite the Court’s avoidance of mention of software in the opinion, the Alice decision has had a dramatic effect on the validity of so-called software patents and business-method patents. Since Alice, these patents have suffered a very high mortality rate. 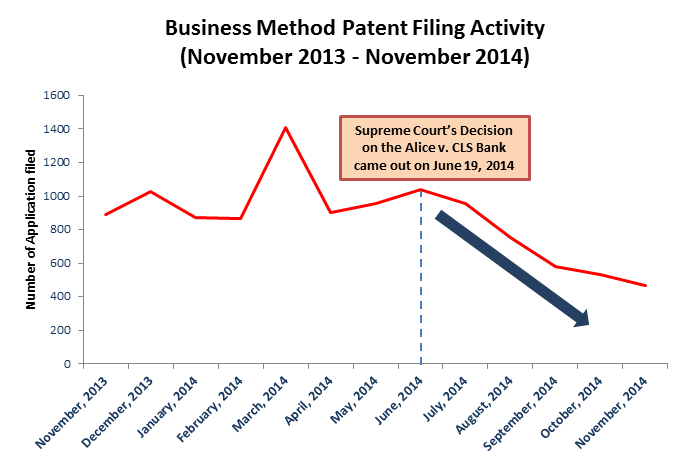 Patent issuance statistics from the PTO show a significant drop in the number of business method patents (PTO class 705) issued in the months following the Alice decision. The graph above shows that the PTO issued fewer than half the number after Alice that it had issued per month during the period prior to Alice. 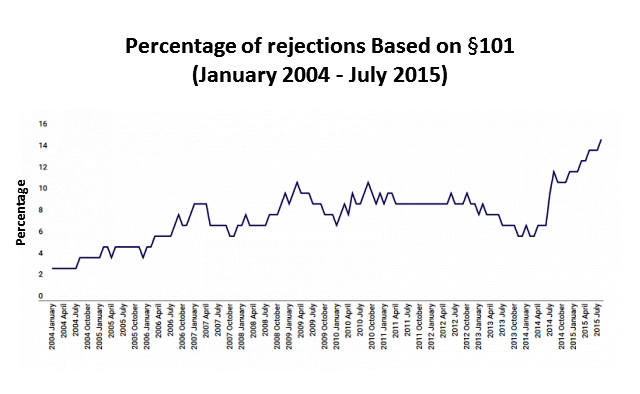 The line graph depicts all patent rejections based on §101 by percentage. The line shows that the percentage was only 7% in May 2014 while it doubled to 12% by August 2014. 101 rejections rose to 15% of all rejections by USPTO by August 2015. Considering that software patents form only a small portion of applications filed in the USPTO, that is huge.

The recent decisions handed down that rely on Alice leave inventors and patent owners asking all sorts of questions about the uncertainties of Alice.