In the movies, we all love the fact that the actors are waving their hands and the projected screens are updated with vast amounts of data and they execute their tasks and investigations and drill down on their research using various gestures. Amazon has recently been granted a patent which identifies gestures to change the user interface so as to protect existing ongoing research. The U.S. Patent No. 9,323,352 titled ‘Child-appropriate interface selection using hand recognition’, describes scanning the user’s hand to determine the age of the user and if the user is not the one who was initially working on the screen, it will switch the interface to a more child friendly one. The patent partly promotes the idea of preventing kids from running into the office, making a bunch of wild hand gestures, and deleting a day’s worth of work. According to patent images, it appears that the switched interface will be more appealing to kids with icons and images such as airplane, trains and what not. 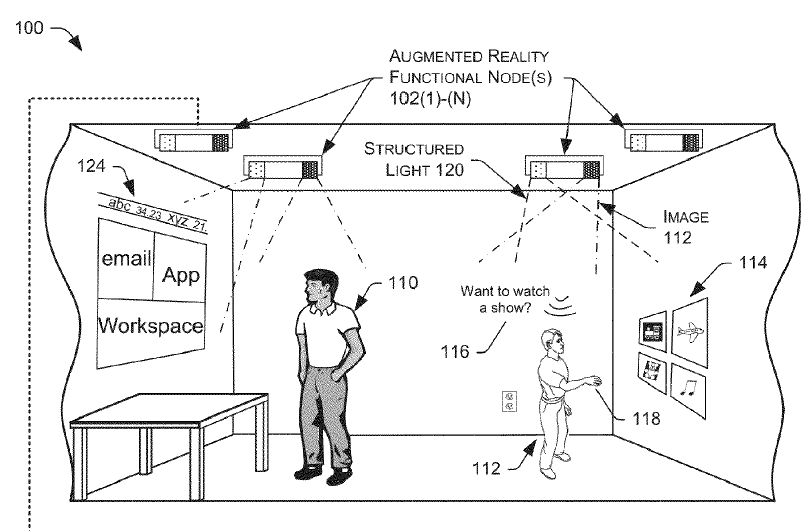 From the image of the patent, it also seems that a “Virtual Reality” system hanging from the ceiling might be in the pipeline of products from Amazon. Let us hope that something incredible is in store for all of us in the near future.

This article is a part of our series of web articles – Latest from the Greatest.

Innovation drives competitiveness! That is the beauty of innovation which fuels every great company to constantly innovate and come up with great ideas, great prototypes and finally great products. Having a patent is absolutely critical and act as a core ingredient to achieve such greatness. Leading companies compete on the impact of their innovations in the marketplace. At Citius Minds, we constantly mine patents to read into the insights into what the future holds. Through these series of web articles, we will be covering latest patents that the leading companies have filed and try to read into how their research is panning out and what great products are lined up for us to grab our hands on.