Yahoo has put up for auction over 3000 patents and expects to raise over US $1 Billion from it. Interestingly, this auction is separate from the core business of Yahoo for which Verizon and AT&T are likely to close on the biddings. That core business sales will have 500 granted patents and about 600 published patent applications included in it. However, the 3000 odd patents which are up for grabs is a separate transaction from that one.

According to one NY post[1] article, the CFO of Yahoo Mr. Ken Goldman believes that their patents assets are worth 3-4 Billion dollars. However, our analysts believe that this valuation is unrealistic. Part of this valuation is likely due to the fact that Nortel in 2011 was able to sell its portfolio for a whopping US$ 4.5 Billion. However, because of Supreme Court’s landmark judgment in the case Alice Corp. v. CLS Bank International, the software patent’s enforcement has been affected drastically. This change in the patent litigation hemisphere makes it a lot easier for the defendants to rest their case against abstract computer patents. Hence, we believe that the portfolio is likely to be fetched at a much lower cost than this figure.

Using our proprietary in-house technology clustering algorithms, we have identified that Microsoft and Google are the highly likely frontrunners for bidding. We also expect that Millenial Media might also be interested in the patent portfolio related to advertising patents.

The following sections will contain Citius Minds’ detailed analysis on the Yahoo portfolio.

Key Technologies in the portfolio 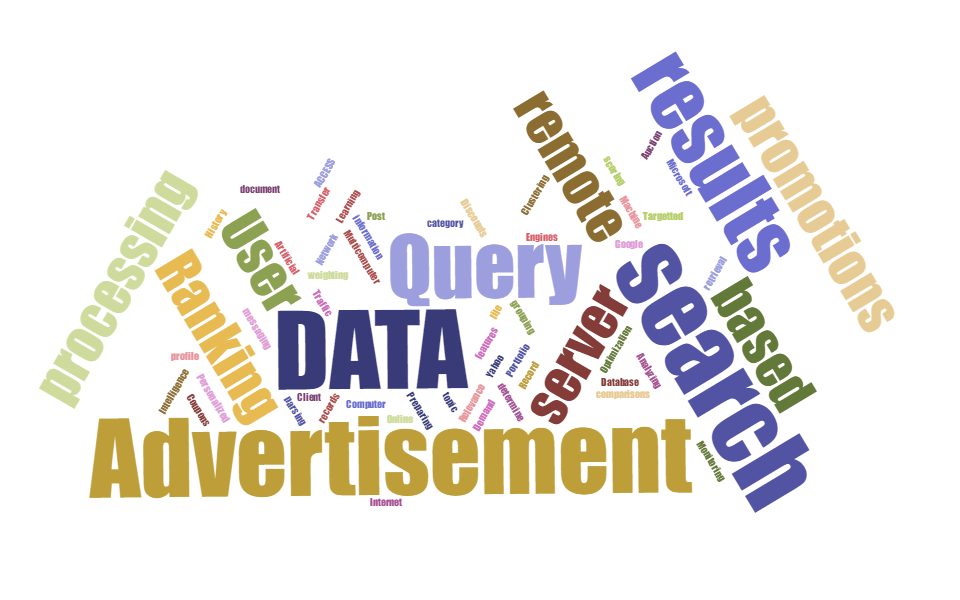 Yahoo’s portfolio that is up for grabs has been recently assigned to Excalibur – a subsidiary of Yahoo specifically focused towards patent selling. The biggest advantage that the Yahoo portfolio has is its remaining patent life with an average remaining life close to 11 years 3 months if considered for granted patents only. However, if we take into consideration published applications that are not yet granted, that number goes up to 12 years 6 months. Clearly a very young portfolio and of immense future scope potential.

Using our in-depth analytic skills, we have identified few of the important sub-technologies on which Yahoo patents are focused. They have been represented in the below technology map. The size of the box indicates percentage of the number of patents filed in this domain, which nothing but indicates the relative importance of the technology sub-domain. 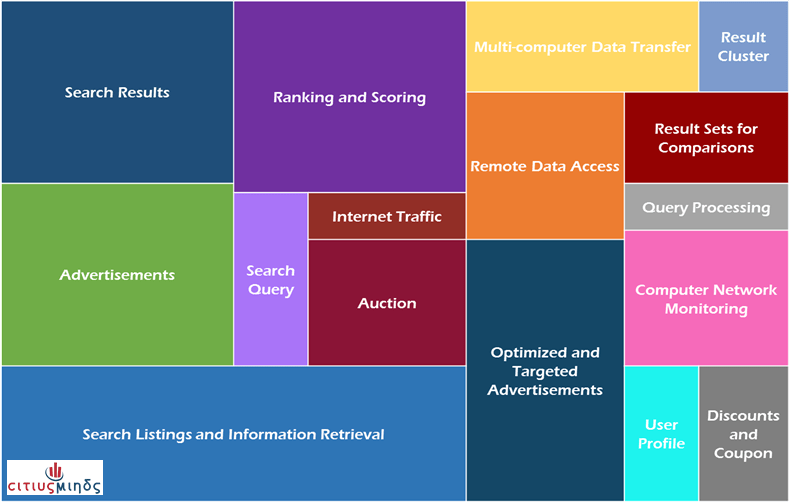 The biggest advantage that Yahoo has going into this as it invites bids is the number of years left of their active patent portfolio. This portfolio’s average remaining life comes out to be 11 years and 3 Months. What even further turns the odds in their favor is the fact that they also have close to 45% of the portfolio which is not yet granted and which once granted will increase the average portfolio remaining life to 12 years and 6 Months. In fact, only 3.7% of the portfolio has a life span of less than 5 years left. 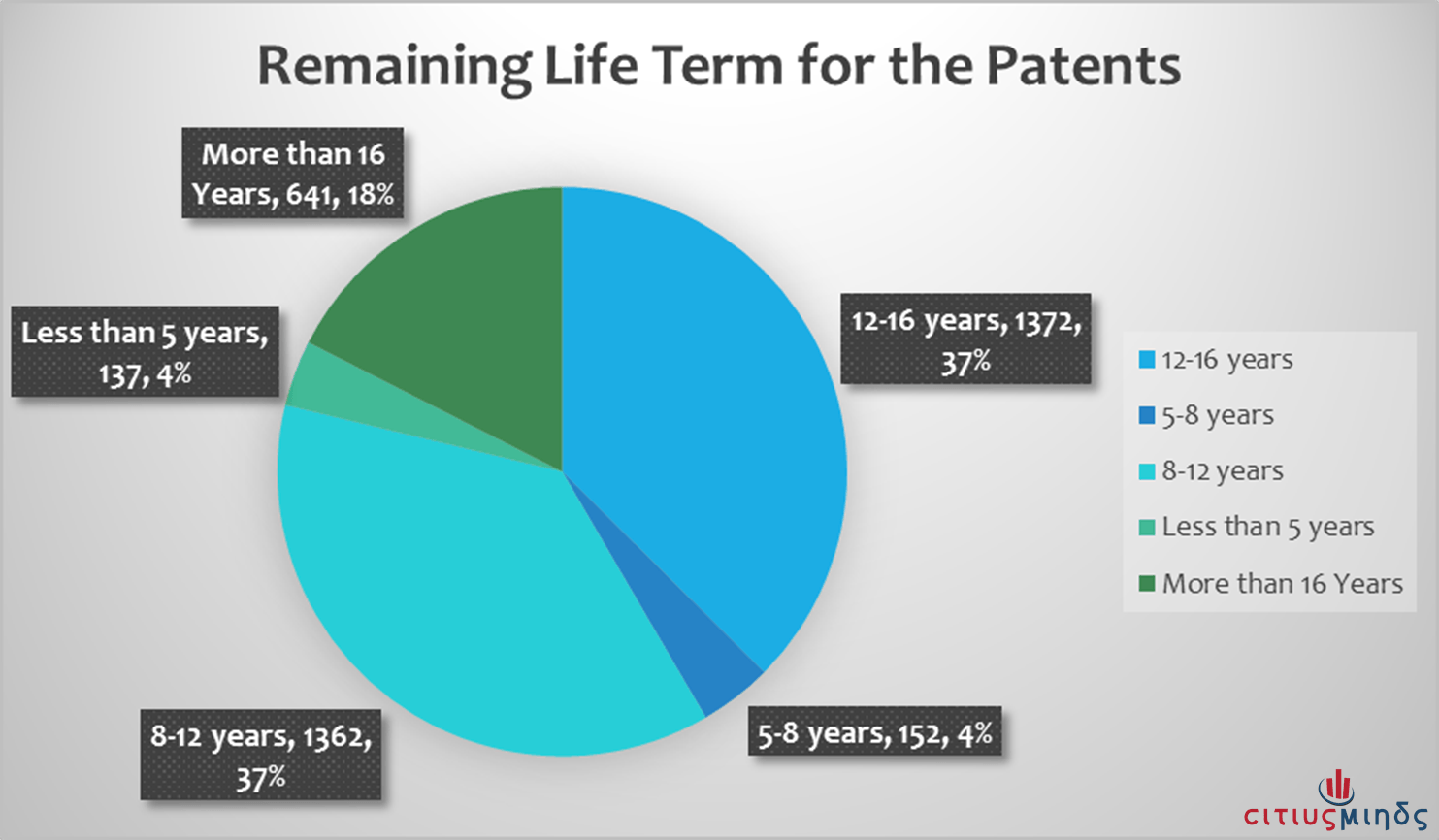 The most likely bidders

Having a look at the portfolio in detail and also considering immense future scope of the patents, it is likely to be an intensive bidding war. From the looks of it, it seems that Microsoft and Alphabet are going to be the most likely bidders considering their popular search engines Bing and Google at the core of their service offerings and since the heart of this portfolio lies in the fact that the patents are focused on search engines, ranking results etc. Another competitors that are likely to show interest is IBM, Sales Force and Milennial Media. Milennial Media is a subsidiary of Verizon and it will make a lot of sense if they show keen interest on this portfolio as they are likely to close their bid on Yahoo’s core businesses. Less likely contenders are Facebook, Apple and Amazon because of these companies focus in revenues through advertisements, focus on AI in recent patents and also the internet of things.

The graph above reflects the number of patents and published applications of Yahoo, these company cites to which leads us to believe that their focus aligns pretty nicely with Yahoo’s portfolio which is up for sale. Interestingly, the last likely bidder in the list is Searete – a subsidiary of a patent trolling firm Intellectual Ventures. Considering their reputation of being a strong Non-practicing entity, it is likely to give Microsoft, Alphabet, IBM and Verizon a strong run for their money.

We will closely track this sale and share regular updates on how this bid is panning out.