Another fastest growing technology for the year 2016 is Perovskite Solar Cells. From the name itself, it is clear that the solar cells are made of Perovskite materials as the active layer. These type of solar cells have been the fastest growing in terms of efficient functioning ever since their advent in 2010. The efficiency rate has grown from 4% in 2010 to 22% in early 2016. Comparing it with other types of solar cells, this 22% is considered to be a humongous absorption efficiency. This promising growth of efficiency have also made lot of companies betting big on manufacturing such solar cells by 2017.

The perovskite is a structured compound, most commonly a hybrid organic-inorganic lead or tin halide-based material, which is used as the active layer responsible for light harvesting. Because of the high efficiency, the panels can be manufactured with a thickness of only 500nm.

Perovskite solar cells have a great advantage over traditional silicon solar cells in the way they can be easily processed. Traditional silicon cells required more expensive multi-step processes which had to be conducted at high temperatures (>1000 °C) and in a high vacuum with an added requirement of a clean room facility. On the contrary, the organic-inorganic perovskite material can be manufactured with simpler techniques in a traditional lab environment. By using a variety of solvent techniques and vapor deposition techniques, both of which have the potential to be scaled up with relative feasibility, a lot of perovskite cells have been processed.

It is still in the early stages of commercialization with the research mostly happening to ensure that the lead in them is stable and not toxic. In this report, we will try to cover the top technology trends that have been observed in the field of Perovskite Solar Cells (PSC).

With the growth rate of absorption efficiency being the best among all type of solar cells, the research potential for PSC is at an all-time high. A lot of companies and universities have spent huge amounts in the R&D for PSC with almost 75% research institutes shifting completely to the research of PSC.

Firstly, let’s have a look at the patent filing activities in the field of PSC. We have tried to cover an overall research trend here as the numbers for 2016 alone will not paint a complete picture.

The chart below represents the research trend in the domain. It is evident from the chart that since 2006, there has been an increasing patent filing activity. With several players such as Fujifilm, BASF, Merck, LG and Sony aggressively doing the R&D and filing patents. With such promising observations in terms of efficiency over the last five years, they intend on manufacturing the panels in 2017 for commercial purposes. As said earlier, the trends of 2015 and 2016 do not reflect an accurate observance as most the patents are not yet available in the public domain. If the trend is extrapolated, it is highly likely that the filing should be anywhere between 300-400 patents for 2015-16. 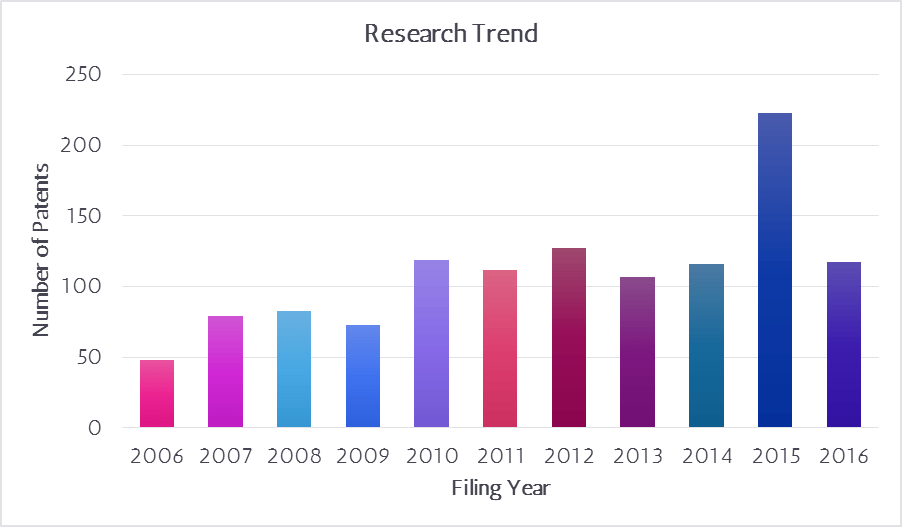 Top Countries Researching in the field of PSC (Overall)

This graph gives an insight on which countries are leading in terms of filing the patents related to Perovskite Solar Cells. USA with 560 patents is the top country with a maximum number of the patents. Japan with 319 patents is ranked #2.

It is evident that USA, Japan and China has a huge market potential and is going to generate a great amount of user base for the consumption of perovskite solar cells.

Asia combined once again forms the core cluster of innovations and companies such as Fujifilm, Nippon, Sony and Samsung dominate this industry space. 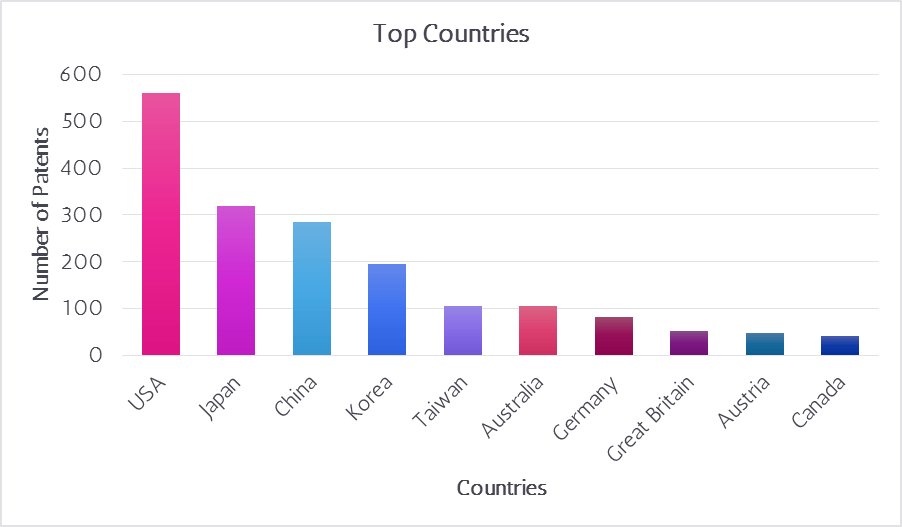 With the technology at the cusp of booming, there is no doubt that a lot of research is happening at the University level. With a high breeding ground for young entrepreneurs, there has been a large jump in terms of patent filings observed over the past five years related to perovskite based solar cells.

The graph below gives details of top universities for the year 2016 along with percentage distribution. Interestingly, one of the research institutes of Lausanne, Switzerland dominates the research & patent filings related to Perovskite Solar cells. The patents mostly focus on increasing the absorption capabilities of the cells as well as the various manufacturing techniques for these panels. 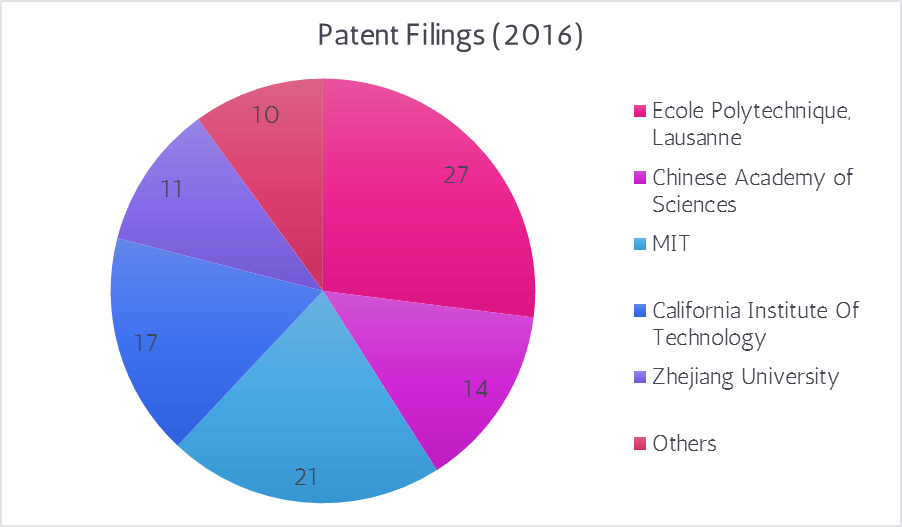 Fujifilm, BASF, Merck, Sony and Toshiba are some of the top companies that are heavily vested in the research related to these solar panels. In order to figure out how exactly their focus has shifted from traditional solar panels research to the perovskite solar panels research, we looked at their patents filed over the last decade. The insights revealed are as follows:

Fujifilm leads the charge with most patents filed closely followed by BASF. Merck, Sony Corporation and Toshiba take the honors at #3, #4, and #5 slot respectively. Interestingly, the german company BASF has more patents filed in US and China then their home country and probably because of a huge market potential and easy mineral resources in their landscape.

Perovskite Solar Cells will likely be available for commercial deployment between 2019 and 2021. This is due to the research on several challenges of lead contamination, stability of the minerals etc. We have also observed that an impactful research is coming out of countries like Singapore, Switzerland, Israel, and the U.K.