Every one of you at one point of time have heard the phrase “Internet of Things” or IoT but most of you also stay perplexed from the thought of what exactly IoT is. The IoT is a term that basically equates to several devices (all devices that can be imagined from computers and smartphones to self-driving cars, kitchen appliances, smart wearable, fitness tracking devices) being connected via the internet. This list is set to expand as more and more years pass by. Simply put, attaching a sensor to any random physical object turns it into a digital object which starts spitting out the information for data analysis. With lots of research happening in Artificial Intelligence, the ability to interpret valuable information from these digital data is immense.

It is estimated that more than 50 billion devices will be connected by the year 2020. This number is no joke and hence IoT is the hottest topic of 2016. Through this report, we have compiled all the hot technologies, gadgets, the top innovating companies so far and the market potential of IoT going forward into 2017 and beyond.

The push to develop devices capable of connecting through a network and facilitate convenience to users worldwide, is at an all-time high. What is even more important is to form an IoT Ecosystem that can enable businesses, governments, and consumers to connect to their IoT devices, including remotes, dashboards, networks, gateways, analytics, data storage, and security.

Firstly, let’s have a look at the patent filing activities in the field of IoT. The numbers for 2016 will not give a complete picture as most of the patents will not be in public knowledge. Hence, we have tried to cover an overall research trend here. 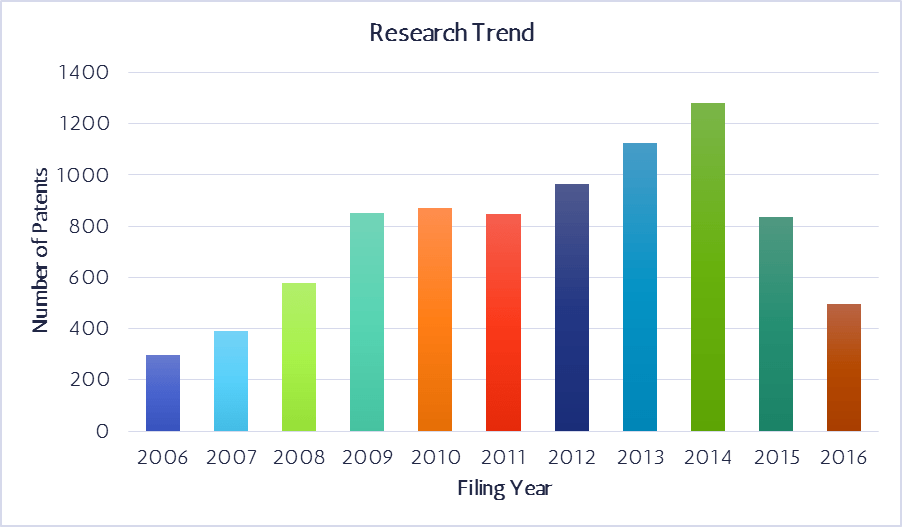 The chart above represents the research trend in the domain. It is evident from the chart that since 2006, there has been an increasing patent filing activity. With several players such as Cisco, GE, Verizon, IBM, Qualcomm aggressively doing the R&D and filing patents aggressively and betting millions into this technology. As said earlier, the trends of 2015 and 2016 do not reflect an accurate picture as most the patents have not been available in the public domain. If the trend is extrapolated, it is highly likely that the filing should be anywhere between 1300-1500 patents for 2015-16. Not bad if you consider 25-28 patents filed every week.

Top Countries Researching in the field of IoT (Overall) 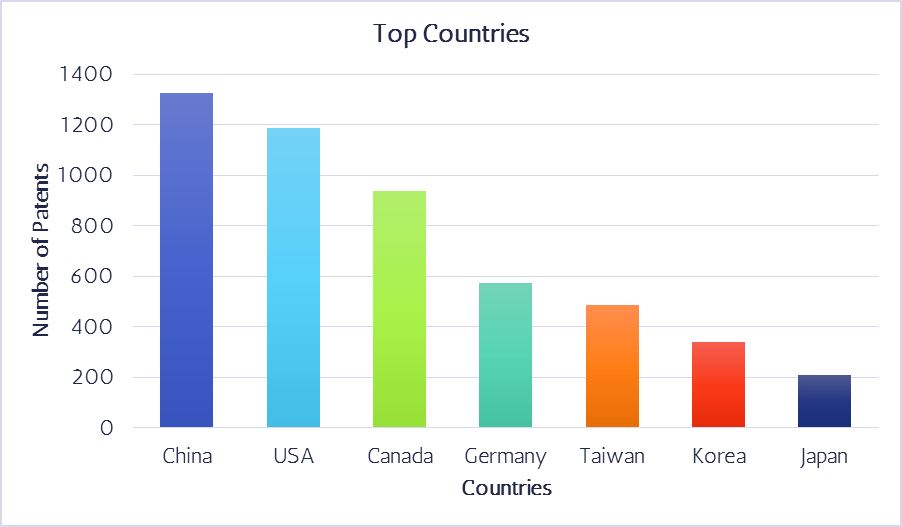 The above graph gives an insight on which countries are leading in terms of filing the patents in IoT. China with 1327 patents is the top country with a maximum number of the patents. The USA with 1189 patents is ranked #2.

It is evident that both China and US has a huge market potential and is going to generate a great amount of user base for the devices that will form the ecosystem of the IoT.

With the technology at the cusp of booming, there is no doubt that a lot of research is happening at the University level. With a high breeding ground for young entrepreneurs, there has been a large jump in terms of patent filings observed over the years in IoT.

The graph below gives details of top universities for the year 2016 along with percentage distribution. 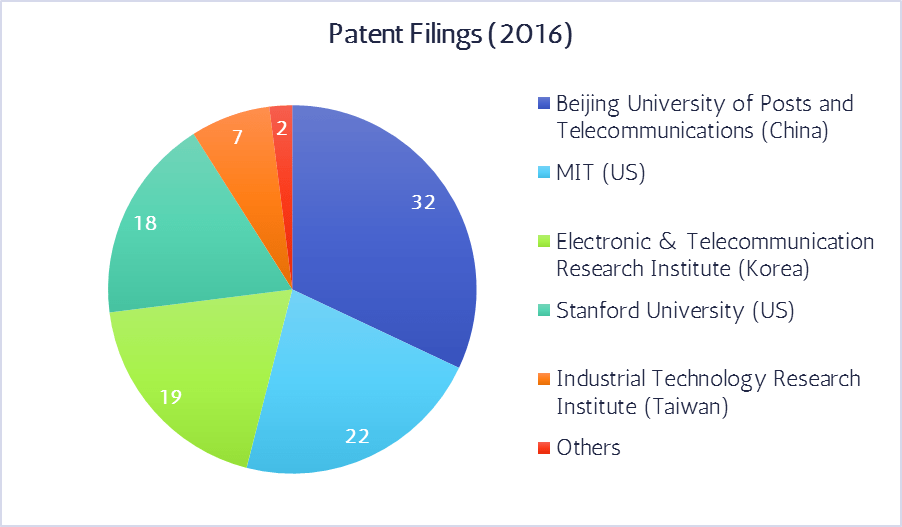 ZTE, Qualcomm, Cisco, IBM are some of the top companies that are heavily vested in the research related to Internet of Things. In order to figure out what how exactly their focus has shifted from non-IoT based research to IoT, we looked at their patents filed over the last decade. The insights revealed are as follows:

ZTE leads the charge with most patents filed closely followed by American innovation company Qualcomm. Cisco, IBM and Intel take the honors at #3, #4, and #5 slot respectively.

The maximum patent filing has been observed in Industrial IoT. 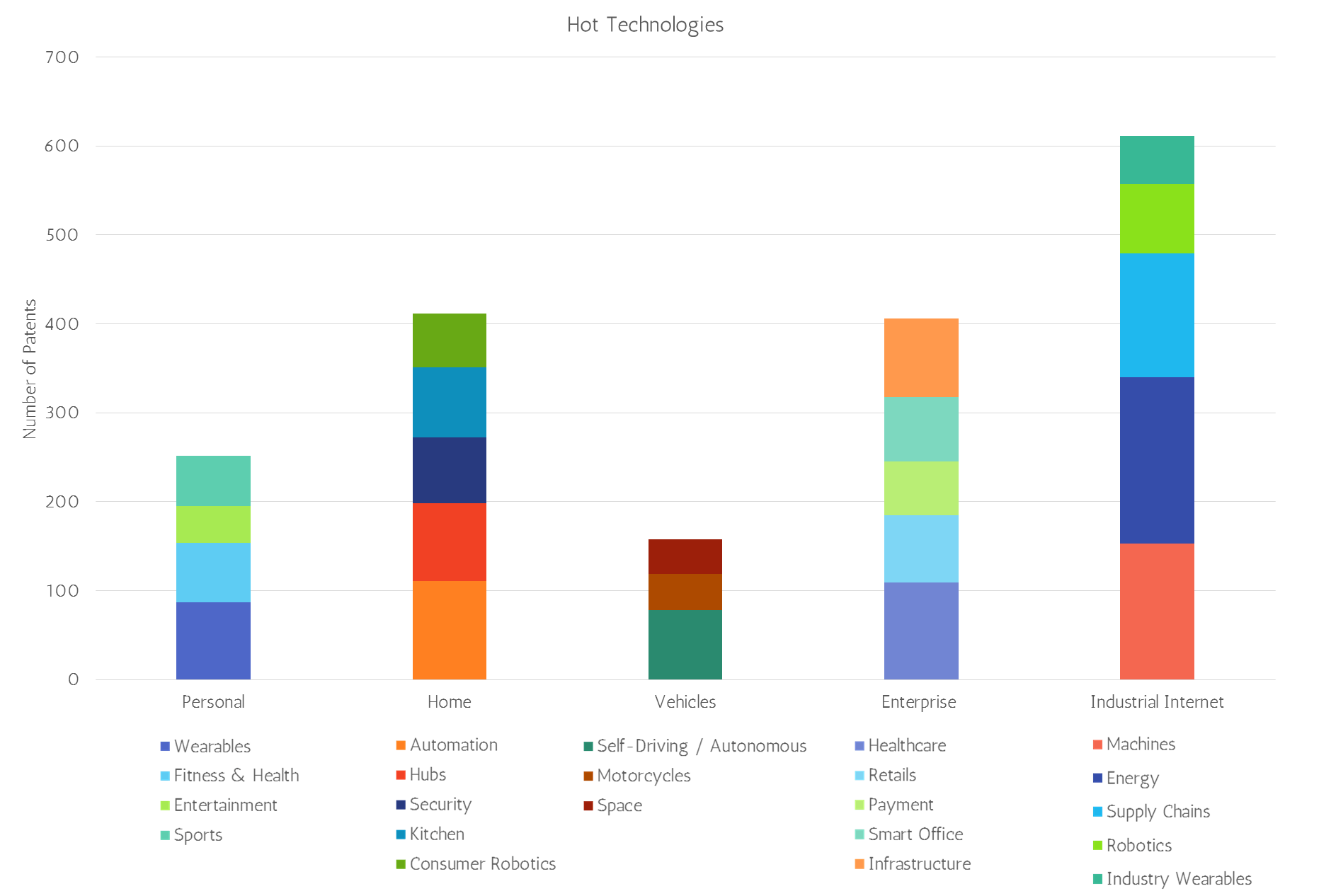