With close to 400 million members logged in from over 200 countries, LinkedIn is the most powerful professional networking platform which connects professionals across various domains. Founded by Jeff Wiener in 2003, majority of the features provided by LinkedIn to its users are free. However, services such as Talent Solutions (including Hiring, Learning and Development), Marketing Solutions and Premium Subscriptions are monetized. In today’s competitive environment, having a strong IP Portfolio not only improves market position but also helps in creating revenue streams. LinkedIn has a whopping 68% of the patents in their portfolio which comes from technology giants such as IBM, AT&T, Cisco, etc. What’s even more staggering is that 66% of the 68% originally belonged to IBM.

This strategy of buying big seem to be a method of protecting itself against useless litigations filed by Non-Practicing entities (NPEs). By arming itself with such a defensive IP Portfolio, it has ensured that patent trolls or NPEs are not able to take undue advantage by buying and enforcing these Patent rights against them. It is a very smart move towards company’s safe future. Several other companies such as Facebook, Twitter, and Google etc. are also taking this route to simply ward off ridiculous patent lawsuits. 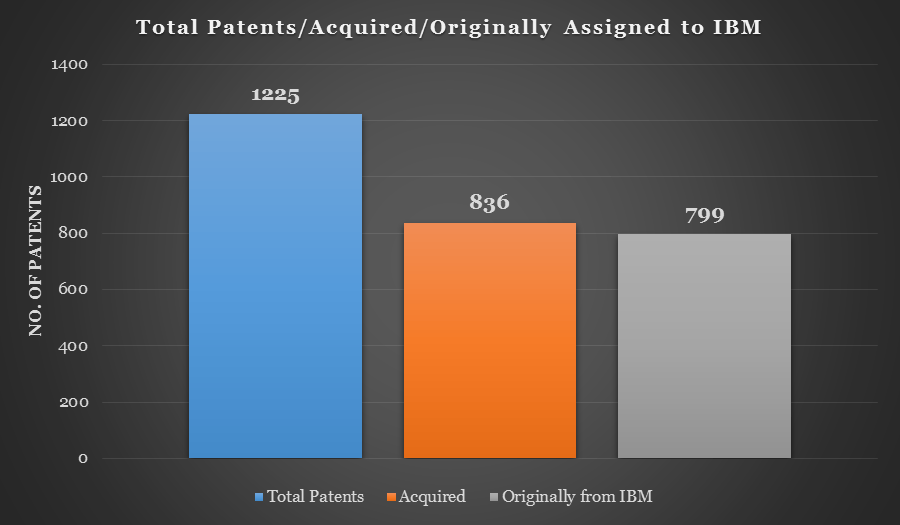 The graph above shows how the LinkedIn patent portfolio fares in terms of acquisitions and in-house patent filings. For this analysis, 1 family member per INPADOC Family has been considered.

The portfolio acquired from IBM mainly consists of 48% patents focusing on Computer Software, 32% on Computer Hardware while the remaining cover other technologies. The majority of technology protected will boost LinkedIn’s talent, marketing, and subscription products.

It’s only recently that LinkedIn has started to bolster its IP by in-house patent filings. Based on our analysis of the available on Thomson Innovation, it now (June 2016) has 32% proprietary patents as compared to only 13% in October 2015. The recent filings from LinkedIn range from showing Social Contacts recommendations while browsing one’s profile to predicting how to get a job based on his/her qualification and experience.

This recent trend clearly indicates that after the initial big patent purchases, which were a defensive patent strategy, the company is now focusing on building and patenting its own arsenal of innovative algorithms to complement their line of products and stay competitive.

LinkedIn’s patent portfolio is cited by a majority of NPEs, competitors and other innovative players of the industry. This consolidates the fact that LinkedIn now owns a major chunk of important patents and hence has positioned itself as one of the leaders in the computer software space. This makes LinkedIn a top acquisition target for several software giants who are not so active in the social media space, like Microsoft, Apple, Oracle, etc.

We are all waiting to see what future holds for LinkedIn and what it has to offer in the near future.