This article categorizes and graphically analyzes research trends around the mechanisms, and new innovation in Driverless Car technologies from various perspectives and highlights the key companies involved.

It is of no surprise that the deaths occurring by traffic accidents is on the rise every year. Evidently, there are several companies who have been working aggressively and tirelessly to research safe methods to execute driverless cars. In our study we have covered nearly 7000 patents to identify where the research is happening, what countries are involved and what companies are spending big buck in the R&D of it.

The driverless car-compliant microcontroller and processor units alone will be a $500 million market by 2020; as per an IEEE study and looking at the pace at which the market is booming, we can have self-driving cars on the roads in the near future.

Our study has identified Toyota Motor Corporation as one of the key player in terms of filling the patent’s application. Perhaps, that is the reason why Japan has filed far more patents than any other countries like Germany, USA or China.

Some of the advantages of self-driving vehicles are fewer accidents, congestion reduction and increased roadway capacity, reduction of physical read signage and smoother traffic.

These technologies have arrived rapidly on the market and their future deployment is expected to accelerate.

With the growth rate for driverless cars at an all-time high, several prototypes are already available in the market. LIDAR, GPS and odometry are some of the necessary technologies that act as a foundation of building an autonomous car. With the capabilities such as recreating a complete 3D-virtual image, the cars are safer and more feature enabled these days.

Through this report we have tried to analyze the innovation in the field of autonomous cars with respect to the different technologies curated from a detailed patent analysis.

The chart below represents the research trend in the domain. There are evidences of technology being available as early as 1930s and have continued to evolve. It is also evident from the chart that a boom is observed around the year 2009-2010 and has been consistently growing upwards. With several players such as Fujifilm, BASF, Merck, LG and Sony aggressively doing the R&D and filing patents. The trends of the last two years do not reflect an accurate observance as most the patents are not yet available in the public domain. If the trend is extrapolated, it is surely to go upwards. 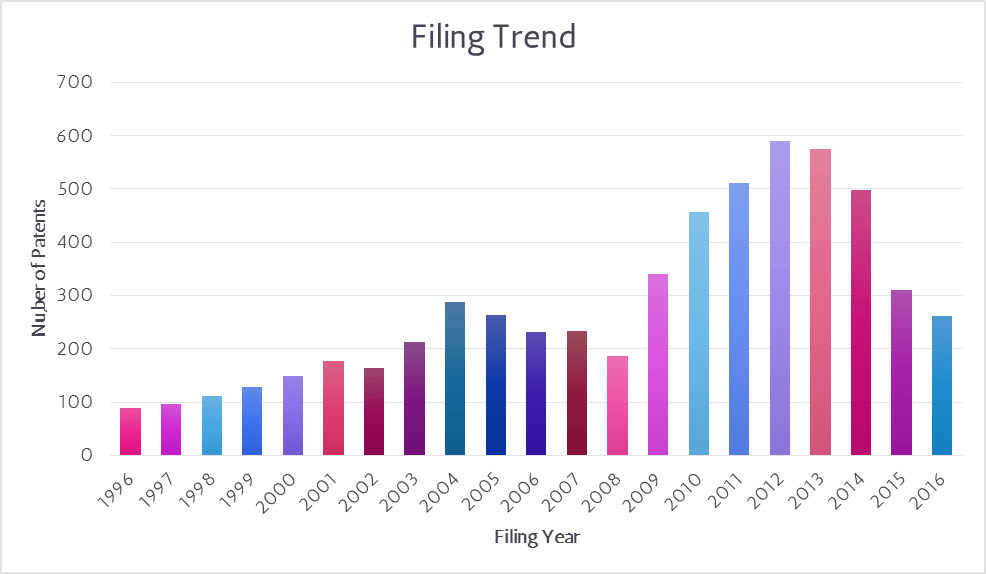 In many countries, different companies already filled their patents related to the field of Autonomous Car-Control Mechanism. There is an immense enhancement in different countries for Self-Driving Car Technology.

According our research prospective out of nearly 7500 patent families, Japan holds at least 48% patents followed by Germany and USA, related to the Autonomous Car Technology. Interestingly, the big U.S. companies like Google, Tesla already have their products in the market. However, the automakers and not the technology companies are leading the way in developing self-driving, “autonomous” cars, and Japan’s Toyota Motors is best positioned to lead the way.

Toyota is, far and away, the global leader in the number of self-driving car patents, as per our analysis. Toyota is followed by Germany’s Robert Bosch, Japan’s Denso Corporation, Korea’s Hyundai Motor Corporations and General Motors Corporation. The top tech. company with the most autonomous-driving patents is Alphabet Inc.’s (Google). 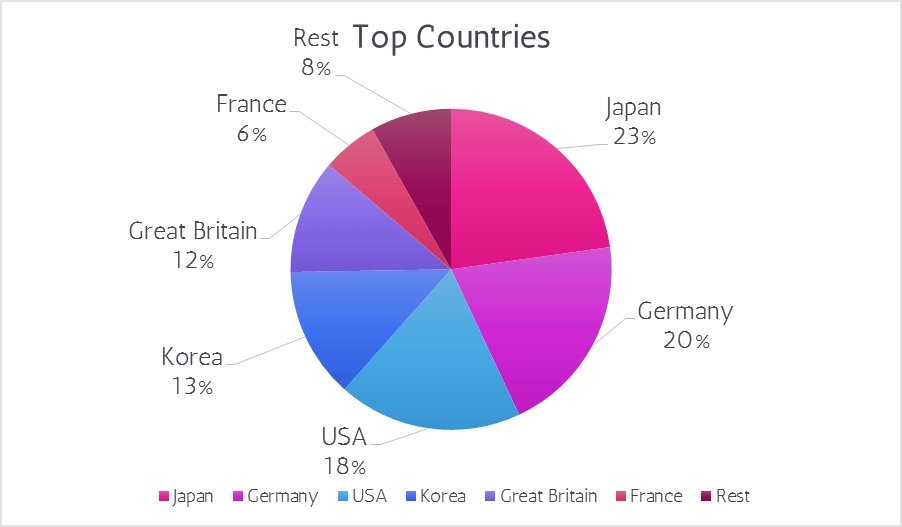 It is evident that Japan, Germany and USA has a huge market potential and is going to generate a great amount of consumer base. 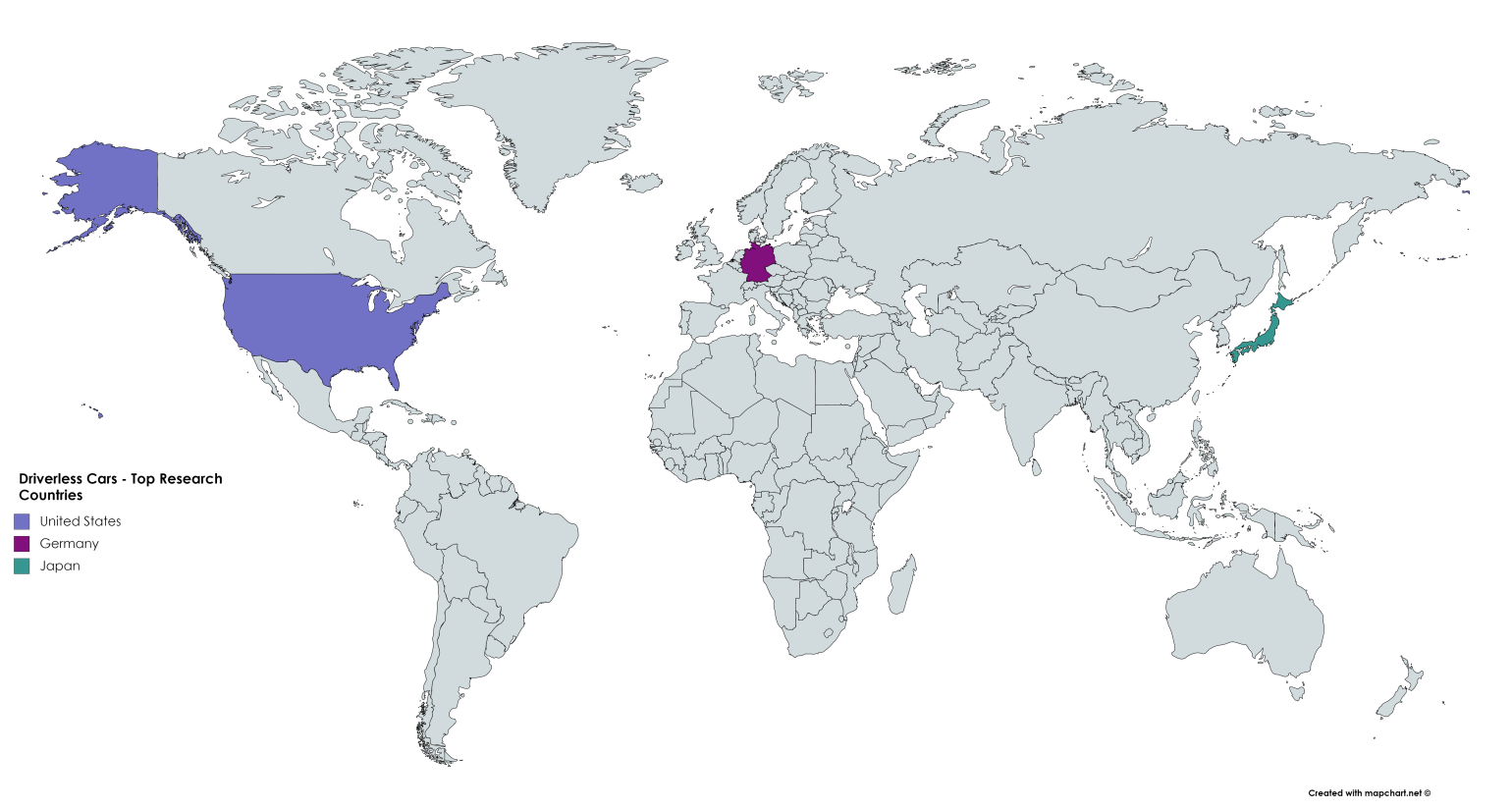 With the technology at the cusp of booming, there is no doubt that a lot of research is happening. Different companies have different focus areas when it comes to sub technologies. Toyota, Robert Bosch and Nissan leads the way when it comes to overall patenting activity. However, when we take into consideration the focus areas such as collision detection and avoidance, signaling, then Mitsubishi, Daimler, Porsche and Volkswagen are the top companies vested heavily.

The graph below gives details of top assignees along with percentage distribution. 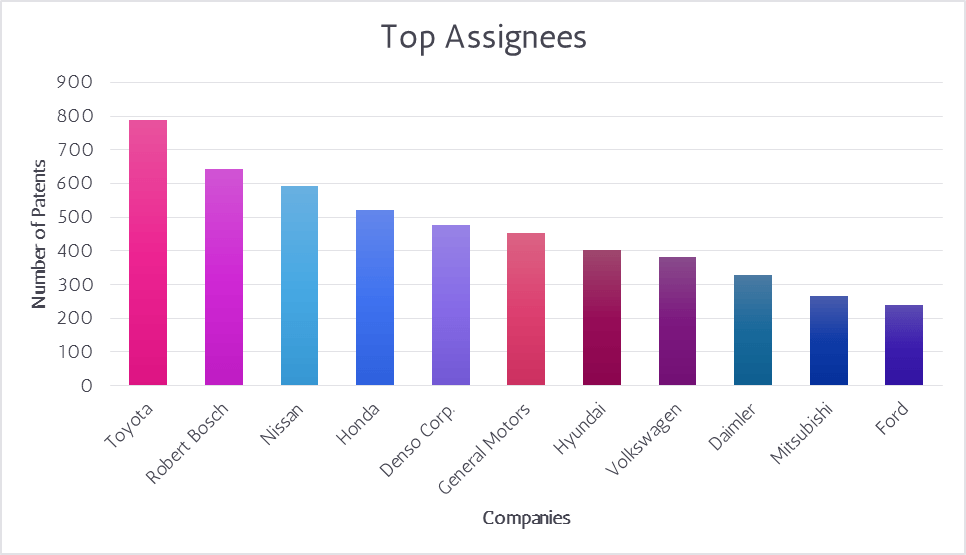 There are several areas where an Autonomous Car comes handy. There are lots of new innovations and ideas introduced in driverless car technology. Modern driverless cars will sense their environment (and other drivers) like a person. Right from the implementation of technology for public transport, cabs to acting as a convenient option for people traveling to offices daily or planning a long drive on a crowded weekend – the options are only going to expand.

Recently, Google has launched two types of vehicles on public roads, The Engineering team of Google is working hard and at the end of this year, there target is to make 100 odd vehicles more for public transportation.

Well Google also intends on bringing the self-driving feature in cabs and for that they have a working prototype in place.

If in the near future, an autonomous cars be used for takeout delivery, then it shall mean savings such as driver fees and driver tips which will help to cut down on frustrating mark-ups involved right now.

Efficiency and route optimization, and a potential reduction in fuel costs are very tempting for the fleet companies to switch to autonomous logistics and the industry is set to be revamped by 2020 with major players like Fedex, DHL and UPS already investing heavily in the R&D.

Products in the Market

Waymo, previously known as the Google self-driving car project, is an autonomous car developer and an independent company under Alphabet Inc. The company began in 2009 as a project under Google. In 2015, the project completed its first driverless ride on public roads, giving a ride to a sole blind man in Austin, Texas. Vehicles have sensors and software that are designed to detect pedestrians, cyclists, vehicles, road work and more from a distance of up to two football fields away in all directions. Do also catch our read on the latest patent related to Google self-driving cars in our older posts.

Toyota’s approach to self-driving technology is called the Mobility Teammate Concept. The car has already been tested on Tokyo’s Shuto Expressway in a series of trials covering functions like merging onto or exiting the highway, and maintaining or changing lanes. The driver can switch into automated mode only after passing through a toll gate and entering an on-ramp. The car uses detailed maps and its own sensors for orientation purpose to keep track of everything around it. Toyota has mentioned that the technology is being tested and is expected to be production-ready by 2020.

Tesla is the king of the advancement in the car technology especially in electrically plugs in car. Starting October 2016, all Tesla cars are built with the necessary hardware to allow full self-driving capability at a safety level. After the required testing, Tesla expects to enable full self-driving by the end of 2017.

Tesla Model S play a major role of the semi-autonomous car market. The vehicle has proven to be self-efficient. It is equipped with automatic steering, wheel and braking control. The vehicular Communications System in this car is also futuristic. All the Tesla Model S cars function through a network. They can share and access information processed by other cars.

On March 31, 2016, Elon Musk revealed the full supportive self-driving technology model named as Model 3; have the hardware needed for full self-driving capability at a safety level substantially greater than that of a human driver.

The future is very bright for autonomous vehicles and we can expect a huge growth and advancement. The main purpose of autonomous driving in this scenario is to act as a back-up for the driver in order to avoid an accident. The autonomous capability is not meant to control the car but acts only as a second line of defense in the event that a mistake by the driver is imminently going to cause an accident. Google’s Waymo, Uber’s venture into self-driving technology, Tesla’s brilliant ecosystem to run the car on a software are all strong indicators that Industry is headed towards automation with likely a 100% adoption by 2025.

Japan, which holds the leading patents in terms of Driverless Car technology, the government there is working towards enablement of the Self-driving on Japanese highways. A fully automated driverless technology is envisioned by 2025, but it is likely to be restricted to the freeway driving and not the city driving adoption. 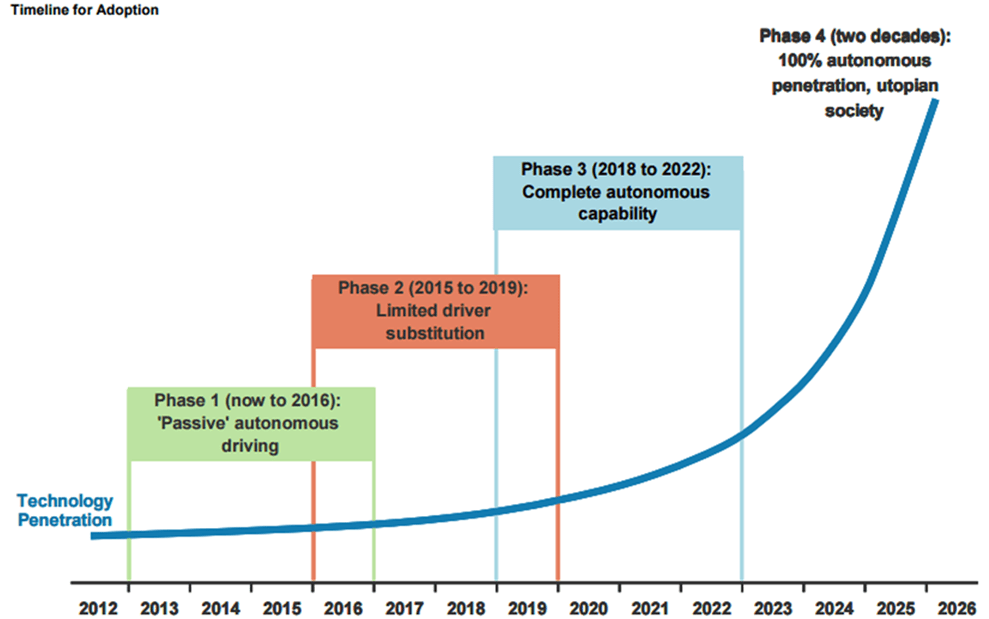 According to one of the Morgan Stanley Papers, it shows that an Autonomous car’s adoption by the world is very likely, as per the graph above, representing the Future reviews Self Driving Cars.

The Self driving cars improve vehicles efficiency and helps to minimize loss of control on the road. Self-driving car is designed to minimize accidents by addressing the main causes of collisions: driving error, distraction and drowsiness.

Considering the fact that companies are pouring billions of dollars into research and design, while petitioning governments for approval, it is only a matter of time when we discover driverless technology to be adopted on a larger scale and offers endless convenience to us.

Not to ignore the fact that the patenting activity worldwide is on an exponential rise for the past decade and is likely to go up over the next 5 or 7 years. The higher adoption of electric cars and with lots of car players focusing on the technology, the implementation of fully automated driverless cars is not far away.